RAID 1E — which, depending on the vendor, is also called striped mirroring, enhanced mirroring, and hybrid mirroring — is a RAID level that combines RAID 0’s striping capabilities with RAID 1’s mirroring protection. If you’re thinking that this RAID method sounds a lot like RAID 10, you should understand one critical difference between RAID 1E and RAID 10. RAID 1E uses an odd number of disks to achieve your data protection goals while RAID 10 requires the use of an even number of disks.

Whereas RAID levels 0 and 1 each require a minimum of two disks, RAID 1E requires a minimum of three disks. Keep in mind that RAID 10 requires at least four disks. As is the case under RAID 1, RAID 1E has a 50 percent disk capacity overhead. In other words, only half of the total capacity of the array is available for use.

RAID 1E works by striping data across all of the disks in the array a la RAID 0. As you know, however, RAID 0 is less than ideal for enterprise environments since the loss ofany disk in the array results in the loss of all data stored on the array. Where RAID 1E becomes viable is in the next step, in which a copy of the data is then striped across all of the disks as well. Simply striping the data in the exact same way as the initial stripe would not be any good since copies of the data would still reside on the same disk as the original copy. RAID 1E therefore, shifts the second copy of the data over on each physical disk. Take a look at Figure A. Each number refers to a block of data. A number with an M refers to a mirrored block of that data.

Now, imagine that disk five suffers a failure. Blocks three and eight are stored on that disk, along with the mirrored copies of blocks five and ten. However, the array can suffer this failure since mirrored copies of blocks three and eight are stored on disk one. In theory, you can lose multiple disks in a RAID 1E array as long as the disks are not adjacent. In Figure A, for example, you can lose disks one and three, with disk one’s blocks one and six mirrored to disk two, and disk three’s blocks two and seven mirrored to disk four.”

RAID 1E looks to be an interesting alternative to RAID 1 when somewhat better performance is necessary, and you don’t want to go the RAID 10 route. Are any of you running systems with RAID 1E? If so, leave a comment and let us know your reasoning and experience. 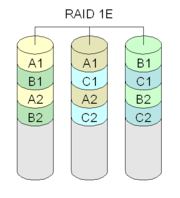